Unveiling the New Jeep Compass at the WSL 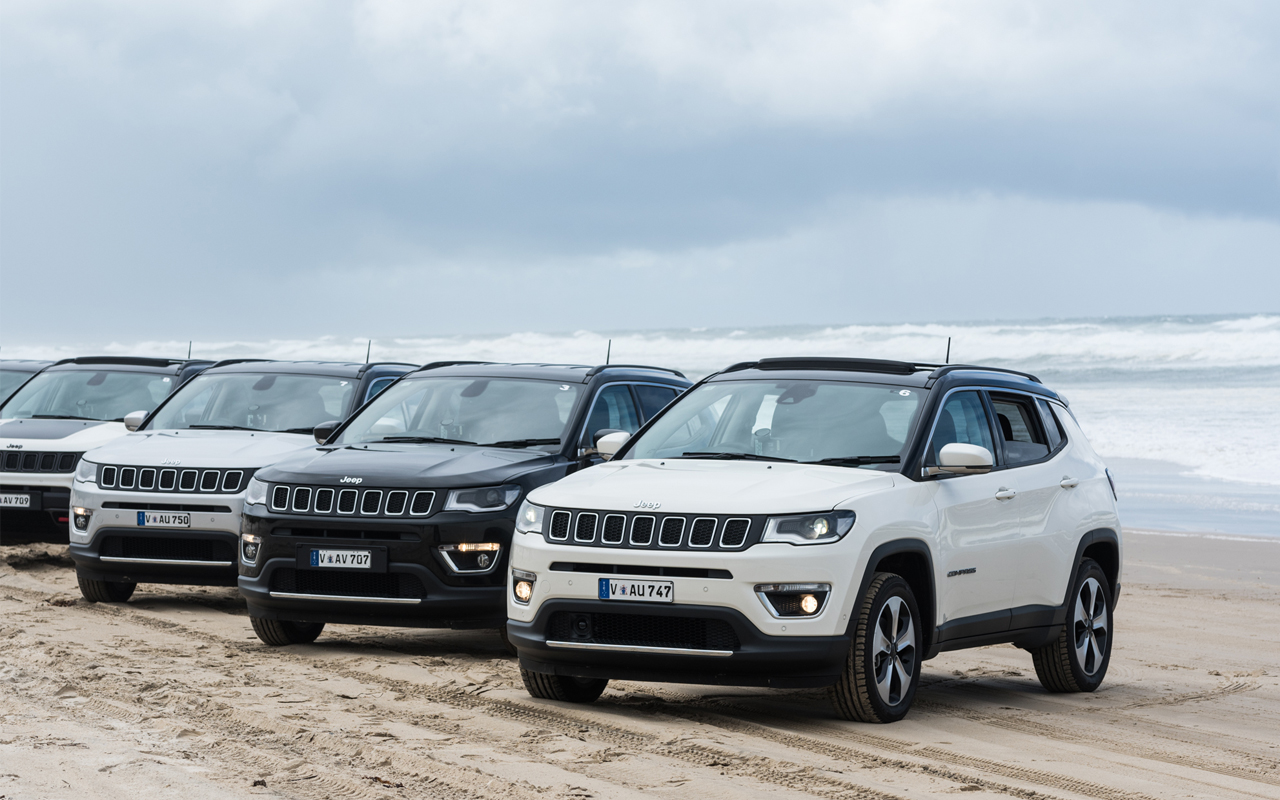 by : Marten Ascenzo 3 years ago
0 shares

If you live in an Australian city, chances are your commute consists of a soul crushing amount of traffic and tiny car parks that you have to 9-point turn to get out. In the past, we’ve opted for the big Aussie sedan which had all the room you needed for traditional Aussie road trips, but guaranteed you couldn’t park anywhere near work in South Yarra.

Then the ‘Hot Hatch’ came along, which allowed everyone to weave in and out of traffic on their way to Fitzroy for a coffee and easily zoom back home to Abbotsford. The problem came when you decided to go snowboarding for the weekend and your ‘hot hatch’ didn’t quite have the sense of adventure(or space) to make it all the way up the snowy alpine roads.

Along came the age of the compact SUV. The perfect car to park in your tiny allocated car park whilst also comfortably putting your surfboard on top and mattress in the back for a cheeky nap at Bells Beach. It seems Aussies have finally found the perfect urban Australian car, with compact SUV’s dominating the market and having every auto maker rushing to supply Australia’s fuel thirsty demand for the latest cross-overs.

Jeep seemed poised to fill the market with a perfect compact SUV but had discontinued their old generation Patriot before realising the perfect car for Australian roads was probably staring us all right in the face: the all new Jeep Compass, which takes the name of an older generation Jeep without many of the original pitfalls. We were lucky enough to be hosted by Jeep Australia to review the new Compass and attend an event that promoted the perfect lifestyle of adventure and boundary breaking: The World Surf League Quicksilver and Roxy Pro (WSL). 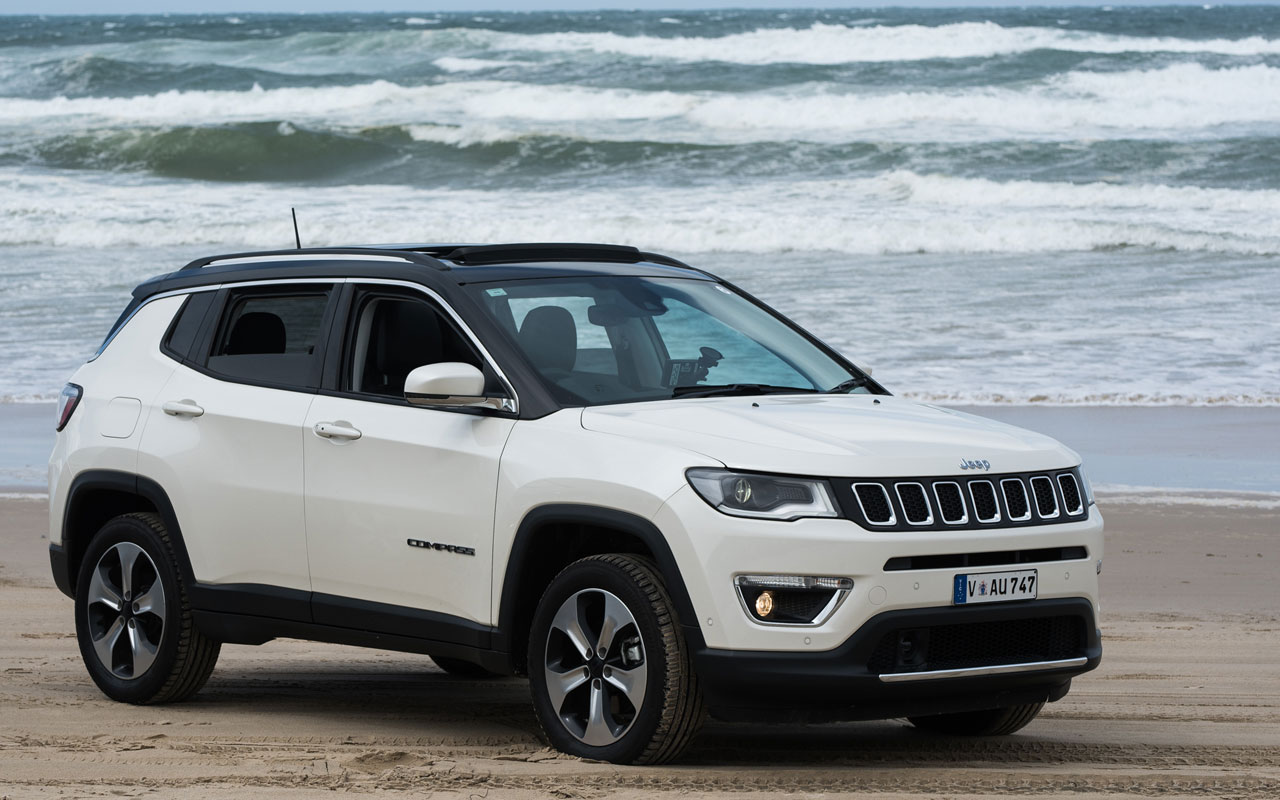 When we landed at Ballina Airport we were instantly greeted by our fleet of Jeep Compasses, which included both the Compass Limited and famous Trailhawk, a first for the Compass. Without a doubt, the exterior styling is a big step-up from the previous generation Compass. While the front end is familiar, the side and rear profiles are a gigantic leap forward; I was actually shocked that this was a Jeep Compass from the side, it was a nicely reworked design with lines that flow beautifully from the front grille to rear taillights. The Trailhawk would be our pick for exterior styling, with the matte black hood feature and higher ground clearance for off road capability, it’s actually a bit of a head turner.

Getting into our Compass and the interior is also a big step forward for Jeep. While the old generation Compass really lacked any sort of interior class (I still remember the gear stick thoughtlessly sticking out of the centre stack), the new Jeep Compass actually has a sense of thoughtful interior design with it’s nicely integrated dashboard and large digital display flowing through to the unmistakable Jeep steering wheel. The leather trim is solid without being overly fancy (it’s still a Jeep, we want to keep it a little rugged) and the cabin is nice and roomy for a compact cross over. Also, there are apparently “hundreds” of ‘Easter Eggs’ hidden around the car. These could be Jeep tyre tracks baked into the plastic under the seat or jeep logos hidden in plain site. I ripped my car apart over the 3 days and only managed to find 12 of these ‘Easter Eggs’, so I’m going to have to seriously dispute Jeep’s claim of “hundreds” of them! 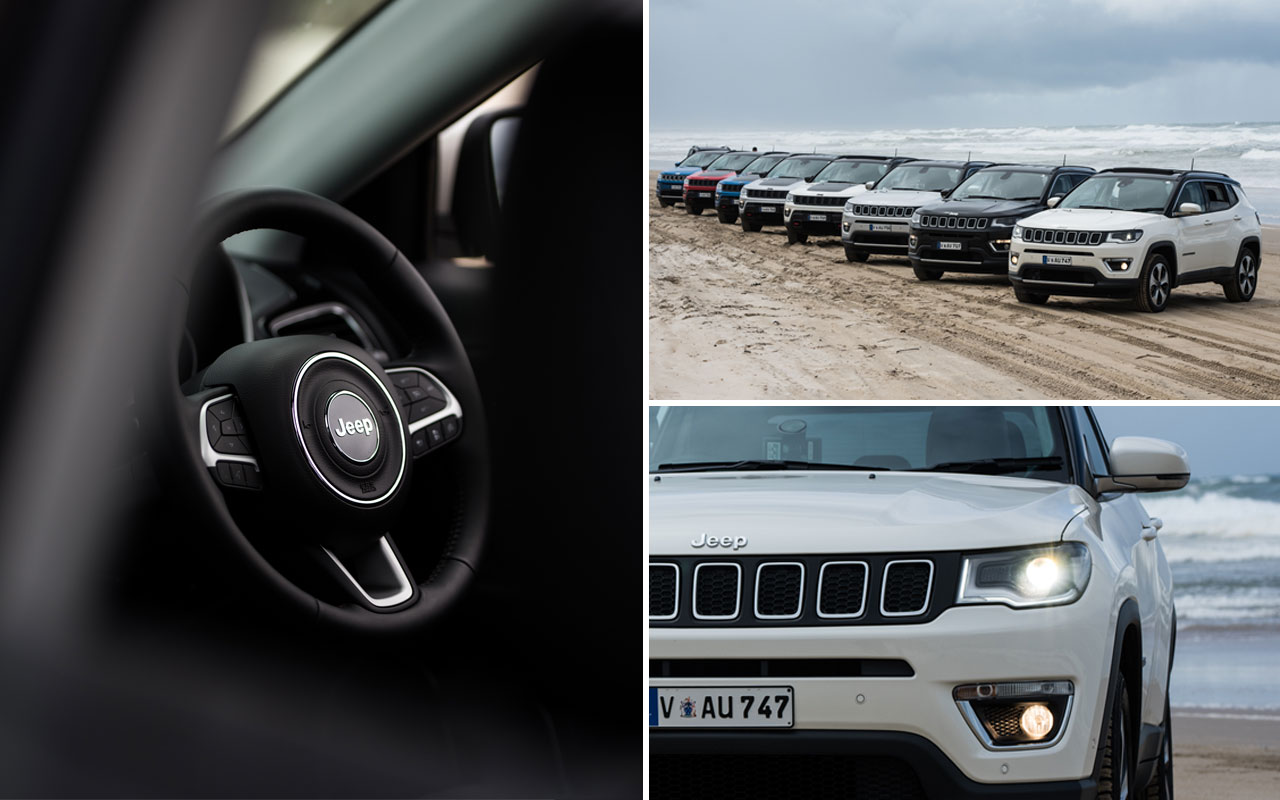 Next up came our drive to an off roading circuit in the outback, which included a downhill decent control portion I thought I actually might total the car on, but for a family friendly SUV I was rather impressed with it’s capability off road. The car managed to understand the track quite well after it had been put into ‘Rock’ mode on the Selec-Terrain control system. The 4 wheel drive lock handled the sketchy trail really nicely, with power being redistributed from wheels that weren’t in contact with the ground or wheels slipping underneath loose parts of the trail. Although there were sections too gnarly to attempt without a Wrangler Rubicon, it actually handled well for a car I expect to see at inner city brunches a majority of the time. A little disclaimer, we were in the Trailhawk variant whilst the Compass Limited took a back seat and watched over the bags and cameras. So if you’re considering some serious off roading maybe take a look at a Trailhawk before diving in for the Sport or Limited models, you won’t be disappointed. 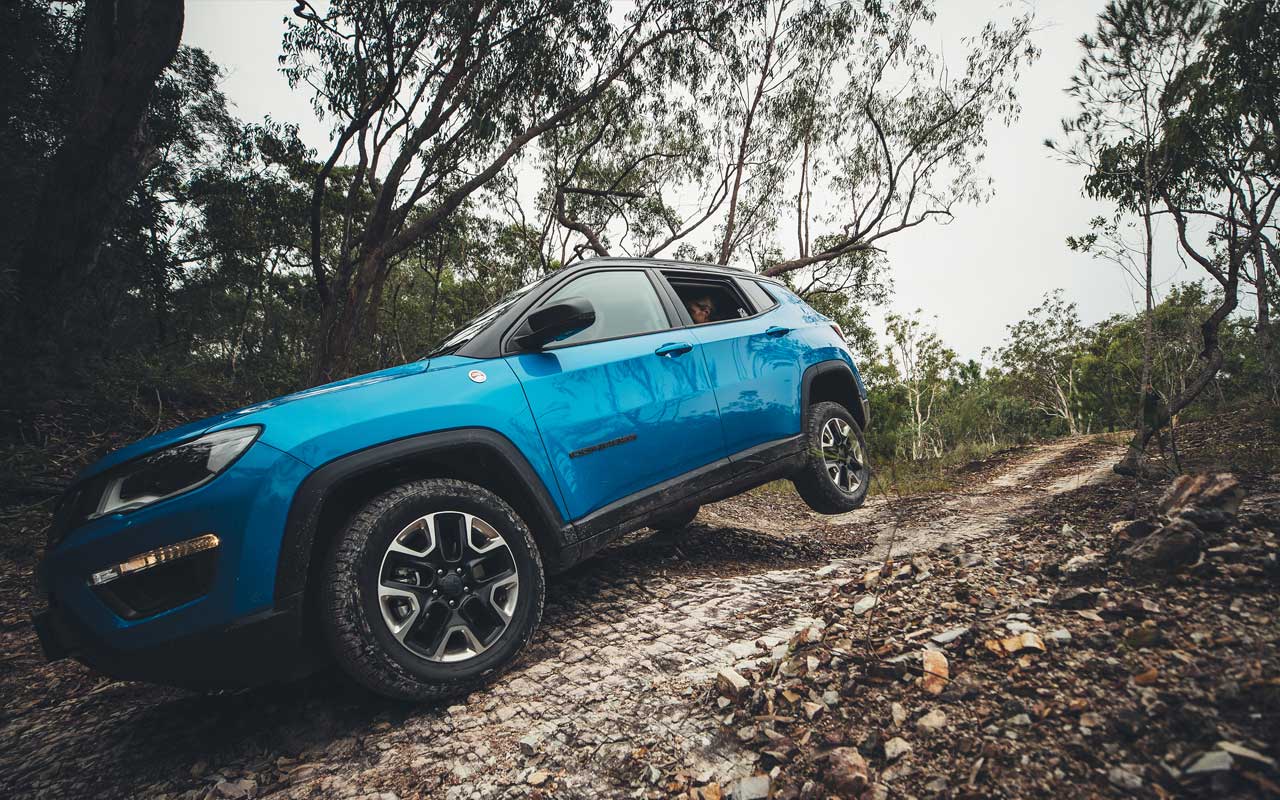 From here we checked into The Byron at Byron for an incredible dinner in the middle of the resort’s rain forest, followed by a presentation which included an introduction to Luke Harvey (actually my driving partner). Luke quit his day job to travel around Australia in his beloved Jeep Wrangler, which was left of field for me as these events don’t usually have guests who love the brand with this type of unquestionable passion. Jeep might have some past troubles with reliability and customer care in Australia, but they have fans that are absolutely crazy about Jeep in a way no other brand has at this level. As soon as they correct these issues (Which they are pushing to do, hence the new 5 year warranty and servicing plan) they actually might convert Aussie’s who strive for a lifestyle of modest adventure into Jeep fanatics, a role usually reserved for the off roading purist.

Up early the next morning and back into our Compass Limited to the Quicksilver and Roxy Pro, where we headed to watch Jeep ambassadors Tyler Wright, Malia Manuel and Jordy Smith compete at Snapper Rocks on what was a rainy stage for the competitors. The day was bittersweet for legend Mick Fanning as he was edged out by Owen Wright and Tomas Hermes. Back at the Jeep marquee I had a chat with defending Bells Beach champion and Jeep ambassador Jordy Smith. While we chatted over the standard elements of his passion for surfing, we actually had some interesting conversation that fell outside his profession and more in line with his new passion of Cape Town, South Africa. 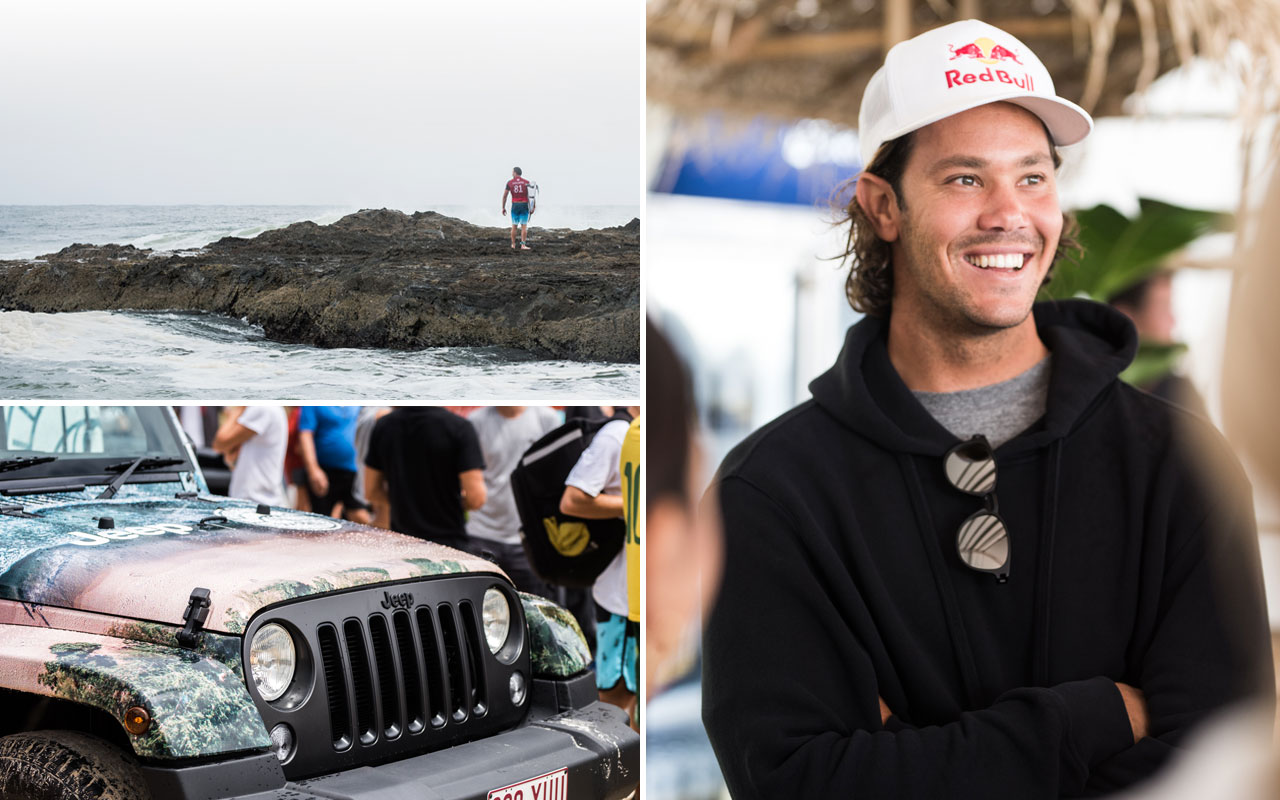 “You’re missing out when it comes to Cape Town coffee, we honestly have some of the best coffee in the world down there”

This was a big claim to a kid from Melbourne, but I was apparently unaware of Cape Town’s thriving tourism scene with Jordy telling me it’s an emerging cultural hub of food, wine and coffee that rivals places here in Australia (relax Melbourne, it’s probably not there just yet…).

“We have it all down in Cape Town. The food and wine is starting to seriously get competitive, we’ve had so many new restaurant openings in the last year it’s insane. it’s honestly going to be the hottest destination to travel to soon, just watch.”

Jordy actually grew up surfing in Durban, a coastal South African city known for its incredible surf before settling down in the new cultural melting pot of Cape Town.

“A summer holiday in Cape Town is an absolute must. I’ve actually opened a few cocktail bars and clubs, and I’ve noticed more tourists coming to my places every year. In summer time we probably have a 50/50 split of tourists and locals, which is just awesome.”

Jordy seemed legitimately excited by the prospect of being an unofficial ambassador to his home town, and I have to say he sold it to me. Watch this space for an upcoming Cape Town travel diary I guess…

On our final day I took my Compass for a road trip to test the everyday drivability of the Jeep Limited. It was loaded with safety features like lane assist, dynamic cruise control (along with basic cruise control if you’re not a fan), blind spot monitoring and an infotainment system that’s been well thought out and is easy to use. The drive comfort is good for Aussie roads, with very little body roll through corners and generally a fair amount of life through the steering wheel. I will say my 2.4 litre Tigershark petrol engine did seem to work hard at times to get the power output I wanted, and I just wish the petrol version could put a little more power down. I’d probably go for the 2.0 litre diesel with the standard four wheel drive configuration, it just seems to put the power down better at low revs with a nicer amount of torque on takeoff. 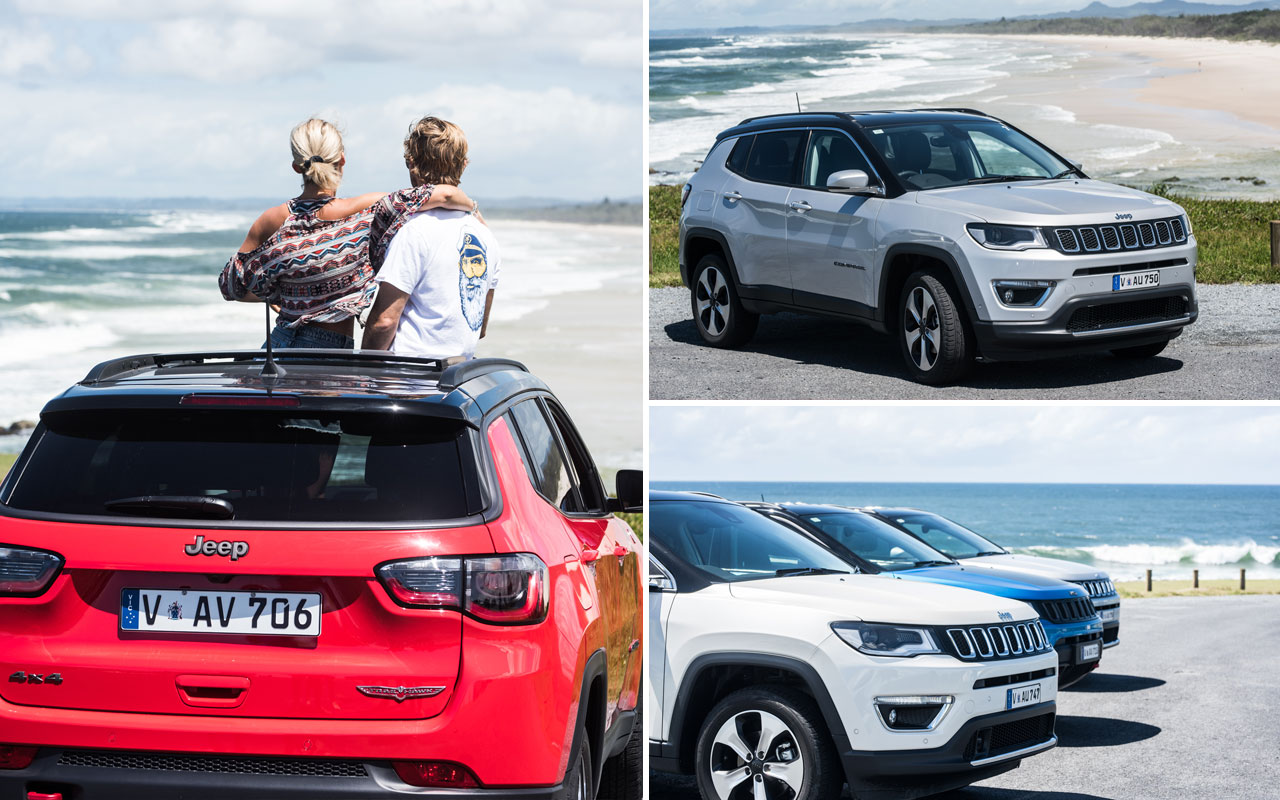 Parking the car for a few photos by the beach and I realised Jeep might actually have a little gem of an SUV here. If Jeep can manage to win customers over to the brand with their new found design language and attention to detail, they’re going to smash this market. Jumping back into the Limited to head to the WSL after party, it was becoming obvious that the brand is trying to reframe Jeep’s past in Australia with a push into adventure without the asterisk of reliability and questionable customer service. If they can stick to this new narrative, what’s to say Aussie’s won’t want to become fanatical fans of Jeep and their new found sense of adventure? 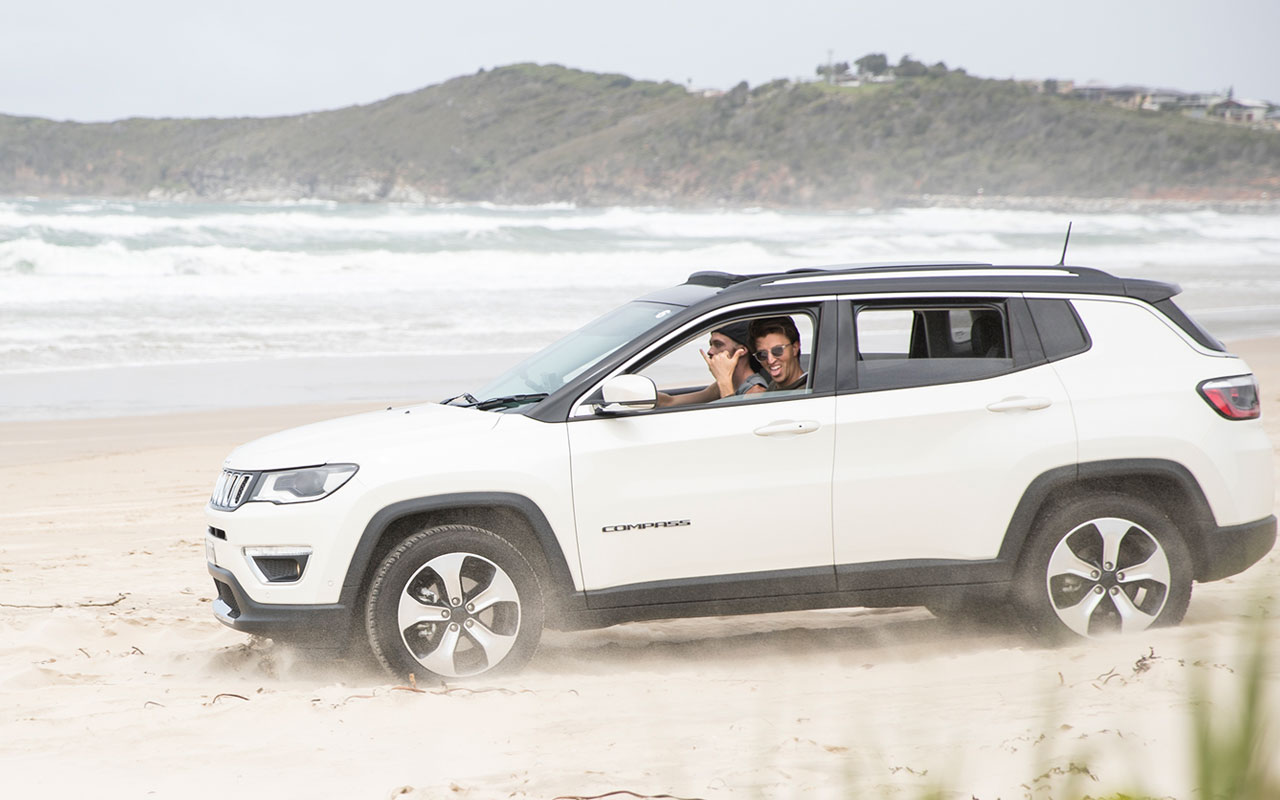 Thanks to Jeep Australia.

The New Ferrari Portofino Is Set To Make Waves 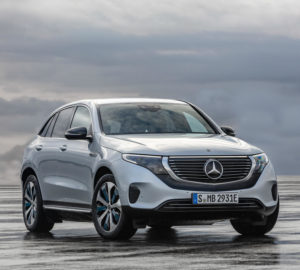 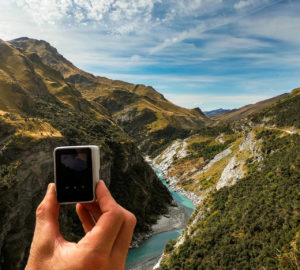